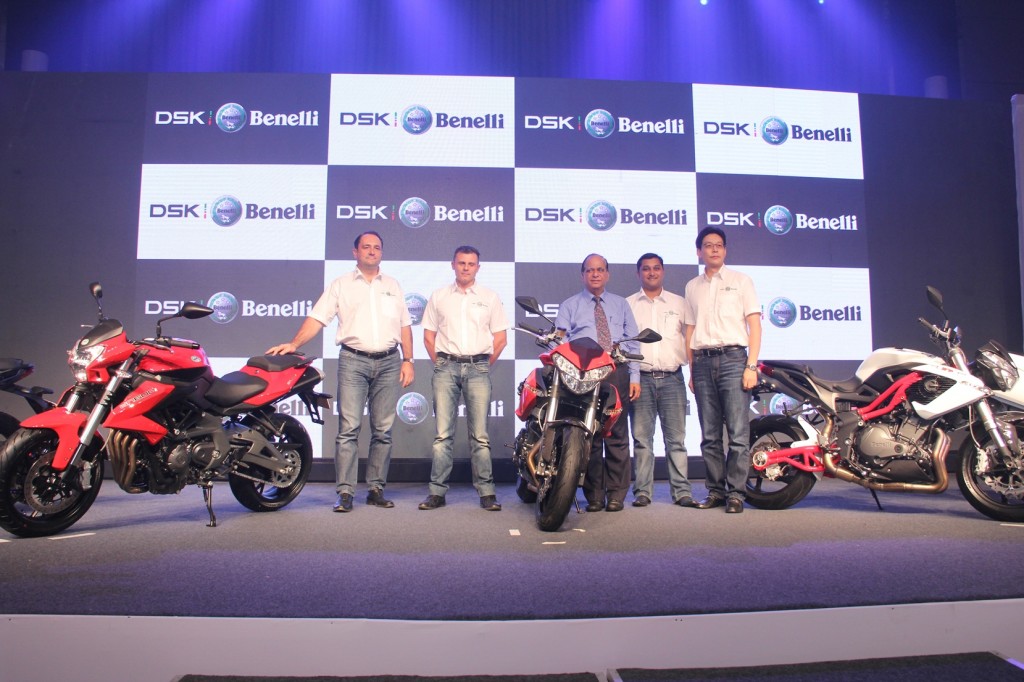 DSK Motorwheels has announced the partnership with Italian Superbike legend Benelli. Benelli is the oldest Italian motorcycle company that boasts an impressive range of Superbikes.

The company is showcasing some Italian flavored bikes seen in India to date, including Tornado Naked Tre (TNT) Superbikes that include two cylinder TNT 302, four cylinder 600cc TNT 600 I as well as the TNT 600 GT, the 898cc three cylinder TNT 899 and 1131cc three cylinder engine powered TNT 1130R. The company has many products in its lineup, ranging from 150cc to 1600cc.

Mr. Frank Zhuang, Board Director of Benelli QJ SRL who was present at the historic tie-up announcement said “After establishing our footprint in nearly 30 countries like Italy, Germany, France, China, UK, USA, Australia and Spain to name a few, we now wish to introduce some of the world’s best designed and performing Superbikes to the second largest two wheeler market in the world. The Indian two wheeler market is growing at a volume of 10-12% and is set to achieve a size of 21-23 million units by 2015-16.

Indian market is the most important market for Benelli, and this will become one of the biggest markets for us in terms of sales.  Our partner DSK has a profound knowledge and good experience in the Indian Superbike market. DSK Motowheels are today the fastest growing Superbike Company in India with strong financial power. We firmly believe Benelli will have great success in India with DSK as its partner, by launching right products at the right time with the right pricing,”

DSK Motowheels will assemble these bikes and sells across the country. The company will also take care of service and spares. DSK Benelli will set up exclusive dealerships in 20 cities over the upcoming months. Mumbai, Pune, Delhi, Hyderabad, Bangalore, Chandigarh, Chennai and Kolkata are in the first round to get Benelli dealership.

DSK Benelli will compete against Kawasaki, Harley-Davidson, Triumph, KTM and TVS-BMW. Company plan to sell 30,000 units every year. We’re looking forward to 150cc and 300cc bikes from them. s