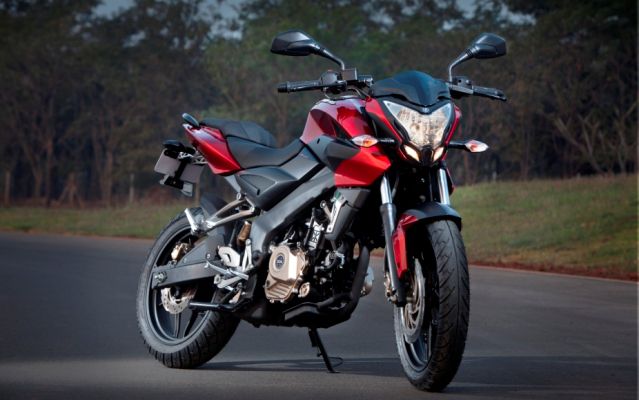 Bajaj launched its next generation Pulsar ‘Bajaj Pulsar 200 NS’ with its Killer street fighter looks. India’s most selling sports bike now comes with the Triple spark combustion system. It features a 200cc SOHC liquid cooled engine, 199.5cc, for value, carbureted engine with Triple spark which produces a max power of 23.52 PS at 950 rpm and max torque of 18.3 nm at 800 rpm.

It has 6-speed gear box which power the bike to reach 0-60kph in 3.61 sec and 0-100kph in 9.83 sec. Top Speed of  Bajaj Pulsar 200NS is 136 Kmph. The new double tube front end suspension and Nitrox mono shock rear suspension improve the comfort and handling of the bike due to low & centralized CG position.

With every new model Baja improved the designed of Pulsar, Bajaj gives a street fighter look to Pulsar 200NS which really looks stronger. The chassis is steel fabricated and has a wheelbase of 1363mm and ground clearance of 167mm. The New Pulsar 200NS is 2017mm longer 1195mm taller and 804mm wider. It weighs 145kg and has 12L fuel tank capacity.

The company claims 58kmpl, when the bike is ridden at speeds around 50kmph, which is pretty good for 199cc bike.

What are the Pros and Cons of buying a Used Car?